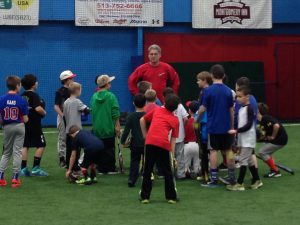 Was the 60th player selected in the 1978 draft and started his professional baseball career in AA with the Milwaukee Brewers. Buster moved through the minor leagues quickly and made his major league debut on May 27th 1980. Buster played with Hall of Famers Robin Yount, Paul Molitor, and Rollie fingers. After his 10 year playing career Buster coached professionally for another 10 years; those teams included the Brewers, Astros, Royals, Twins, and Pirates. Along the way Buster coached many successful players including Carlos Beltran and Mike Sweeney.

Buster’s twenty years of professional baseball experience and his strong interest in youth baseball has allowed him to develop the reputation as one of the top pitching instructors in the tri-state area. Buster’s approach focuses on working on a good pace, throwing strikes by hitting location, and changing speeds. Buster will develop your young pitcher into recognizing the “pitcher must command the game.”

Buster grew up in Western Hills playing his youth ball with the Cincinnati Storm Club and currently resides in Cincinnati, Ohio.